The Altavian Nova F7200 AT is a small Unmanned Aerial Vehicle

equipped with onboard NovAtel OEMStar GPS, Inertial Measurement Unit (IMU), and a Canon™  SL1 18 MP digital SLR camera containing RGB (natural color) and CIR (color infrared) filters and Voightlander™  Ultron optics.  All of the included onboard sensors are utilized in the collection of imagery data that can be used for photogrammetry analysis. The unit is relatively lightweight, having a weight of 18 pounds including the full payload of avionics, battery and camera.  While the Nova F7200 can be flown manually, it has fully automated flight capabilities.  In its current configuration, it has a 9 foot wingspan and is capable of sustaining a 90 minute flight time and surveying 730 acres from an altitude of 400’ AGL in a single flight while achieving 1 inch resolution within the photographs. The efficiency of this system is largely due to the fact that the assembly consists of a series of modular components.  Each and every part of the aircraft attaches with a series of quick snap connectors making assembly fast and easy.  This allows the system to be ready for preflight within minutes of arriving at a location.

The system is launched by hand making takeoff a simple task while landing is accomplished via belly landing (no landing gear) on virtually any surface and requires an area of only 10m x 30m to achieve this task.  The Flare™ ground station software suite allows for the fast and easy creation of flight plans either in the office or in the field.  The system is capable of being equipped with either an RGB camera or a near infrared (NIR) camera.  High resolution aerial photographs captured by the RGB camera can be transformed into extremely accurate 2D orthomosaics and 3D models (DEM) once processing has been completed. The high resolution aerial photographs captured by the NIR camera can also produce 2D orthomosaics in addition to the capability of generating Normalized Differential Vegetation Index (NDVI) values. NDVI indices are an overall assessment of general vegetative health.  The NIR camera can also collect data that can be used in stressed vegetation analysis, detecting moist areas in open fields, and determining plant types (hardwoods and conifers). 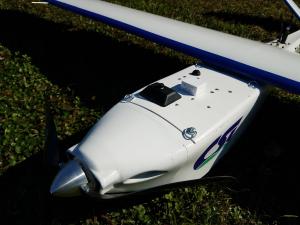 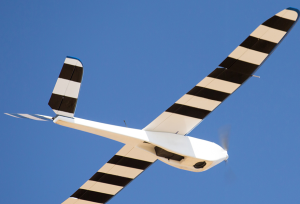