The senseFly eBee is an Unmanned Aerial Vehicle equipped with onboard GPS, IMU, a 16 MP digital camera, and an optical ground sensor.

All of the included onboard sensors are utilized in the collection of photogrammetry data. The unit is lightweight, weighing 2.1 pounds including the full payload of battery and camera.  Although the eBee can be flown manually, it is a fully autonomous system which is capable of surveying 360 acres in a single flight at an altitude of 400’ AGL. The flight planning software allows for the fast and easy creation of flight plans either in the office or in the field.  As a built-in safety feature, the aircraft has an onboard computer that will return home and/or land in the event of a data link connection failure.

The system includes both an RGB camera and a near infrared (NIR) camera.  High resolution aerial photographs captured by the RGB camera can be transformed into extremely accurate 2D orthomosaics and 3D models (DEM) once processed with the included software. The high resolution aerial photographs captured by the NIR camera can also produce 2D orthomosaics in addition to the capability of generating Normalized Differential Vegetation Index (NDVI) values. NDVI indices are an overall assessment of general vegetative health.  Chustz Surveying, LLC purchased this sUAS in June of 2013 and has performed 31 flights supporting several case studies to determine data accuracy, resolution and repeatability. 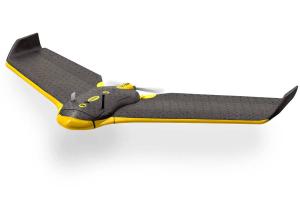